Although recently released data has revealed a decline in UK economic activity, Bank of England (BoE) Governor Andrew Bailey, has expressed hopes that the vaccine roll-out programme will begin to spark a “pronounced recovery.”

The latest gross domestic product (GDP) figures published by the Office for National Statistics (ONS) showed the UK economy shrank by 2.6% in November, as fresh government restrictions to contain the pandemic hit the service sector. This was the first reported monthly economic contraction since April and left GDP 8.5% below its pre-pandemic peak.

However, the decline was significantly smaller than most economists had been predicting and suggests companies were better prepared for the second lockdown. ONS said many firms had adjusted to new pandemic working conditions, for example by expanding click and collect services or other online operations, while manufacturing and construction generally continued to operate throughout November.

The third, stricter lockdown introduced in early January is widely expected to result in economic contraction in the first quarter of 2021, particularly as many businesses will also be adapting to the introduction of post-Brexit EU trade barriers. There does appear to be a growing sense of optimism that the UK economy will recover relatively strongly over the remainder of this year.

BoE Chief Economist Andy Haldane recently said he expects the economy to recover “at a rate of knots” from the second quarter, as the country’s efforts to vaccinate the population continue to progress.

The BoE Governor has also voiced his confidence with regards to the UK’s future economic prospects. Commenting during a BoE online event in mid-January, Mr Bailey said, “I really do think that we are going to see a pronounced recovery in the economy as the vaccination programme, as it is doing now, rolls out.” 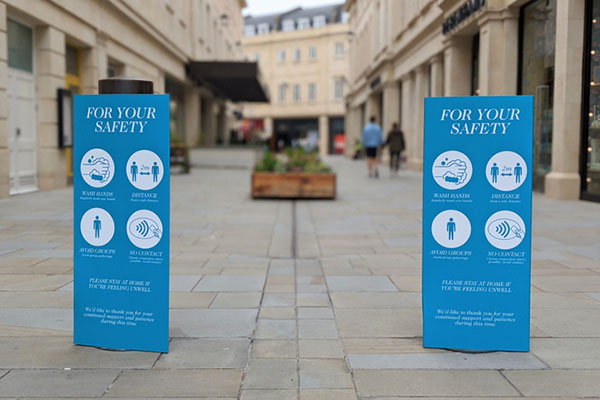 A small rise in sales volumes during December marked a weak end to what has been the worst year on record for the UK retail sector.

According to the latest ONS statistics, retail sales volumes grew by 0.3% in December compared to the previous month. However, this small increase, which followed a 4.1% slump in November, was much lower than the consensus forecast from a Reuters poll of economists and fetched little festive cheer to the retail sector.

A weak December capped the worst year for retailers since records began in 1997. Across the whole of 2020, sales fell by 1.9%, with the clothing sector particularly hard hit as lockdown restrictions meant people had fewer opportunities to socialise. As a result, a string of high street stores have slid into insolvency in recent months, including Topshop owner Arcadia, Debenhams, Oasis and Warehouse.

In contrast, online-only fashion retailers such as Boohoo and ASOS flourished during 2020. Furthermore, with an increasing number of people shopping from home and the growing popularity of click and collect services, last year saw a surge in all internet sales, with online trade accounting for 28% of total retail sales.

The imposition of tighter lockdown restrictions in early January means these trends will inevitably have continued into 2021. Indeed, data from the latest Distributive Trades Survey published by the Confederation of British Industry, shows the monthly gauge of retail sales fell to -50 in January from -3 in December, while retailers expect sales to remain similarly weak in February.

Commenting on the survey’s findings, CBI Principal Economist Ben Jones said, “Today’s data brings home the ongoing challenges of lockdown for the retail sector, as sales volumes weaken once again. With the lockdown likely to remain in place in the near-term, retailers expect this weakness to continue.”

At the end of January, major global markets closed in mixed territory. Vaccine supply issues and short-term economic concerns continue to weigh on sentiment. In the last week of the month, President Biden said the US was working to secure more doses in response to complaints of shortages, while the UK and EU were locked in a spat over the supply of the AstraZeneca/Oxford vaccine.

the US, stocks soared to record highs in January on the hope that stimulus from the Biden administration could accelerate the economic rebound but shares on Wall Street followed European indices lower toward the end of the month, as trading intensified between retail traders and brokers over a handful of closely followed stocks. During the final trading day of the month, the Dow shed over 600 points to close below 30,000 for the first time in six weeks, ending the month in negative territory, down just over 2%, while the Nasdaq closed up 1.42%.

Brent crude closed the month trading at around $54 a barrel, a monthly gain of over 6%, despite this, a consumption rally has cooled after a strong run, in a sign investors were reducing their expectations of demand, amid reinstated lockdowns and spreading virus variants. Gold is trading at around $1,853 a troy ounce, a loss of just over 2% on the month.

The latest public sector finance statistics show the government continues to borrow record amounts in order to support the economy through the pandemic.

Figures released by ONS have revealed that UK public sector net borrowing (the gap between the country’s overall income and expenditure) totalled £34.1bn in December. This was the highest December figure on record and the third-highest borrowing figure in any month since records began in 1993.

As a result, government borrowing for the current fiscal year now totals £270.8bn, an increase of £212.7bn compared to the same period of the previous financial year. This vividly demonstrates the problems facing Chancellor Rishi Sunak, as he prepares to deliver his forthcoming Budget on 3 March.

However, the BoE’s Chief Economist recently backed the government’s stance, suggesting that borrowing on this scale was essential to stabilise the economy. Mr Haldane also predicted that interest rates would remain very low for a long time and therefore did not envisage a looming debt crisis.

The Resolution Foundation has also said that current borrowing levels are required. Commenting on the ONS data, the independent think-tank’s researcher Charlie McCurdy said, “This level of spending may be eye-wateringly large, but it is absolutely necessary.”

The rate of unemployment in the UK has risen to a near five-year high, following another increase in redundancies, particularly amongst young people.

According to the latest ONS statistics, redundancies rose to a record rate of 14.2 per 1,000 people in the three months to November, with 25-34s most at risk of losing their jobs. Indeed, redundancies amongst this age group were 16.2 per 1,000, a fivefold increase from a year earlier.

The data shows 1.72 million people were unemployed between September and November, leaving the unemployment rate at 5.0%. This was up from 4.9% in the previous three-month period and the highest figure since mid-2016.

This latest rise was below analysts’ expectations, which implies the labour market may be holding up better than many feared. While this partly reflects the furlough scheme which continues to support millions of jobs, there have been suggestions the official figure may understate the true level of unemployment.

The BoE Governor, for instance, has said he believes this is the case due to difficulties distinguishing between the jobless who are and are not actively seeking work. This means the data excludes people who have temporarily postponed their job search due to the pandemic.

The value of investments can go down as well as up and you may not get back the full amount you invested. The past is not a guide to future performance and past performance may not necessarily be repeated.

It is important to take professional advice before making any decision relating to your personal finances. Information within this document is based on our current understanding and can be subject to change without notice and the accuracy and completeness of the information cannot be guaranteed. It does not provide individual tailored investment advice and is for information only. We cannot assume legal liability for any errors or omissions it might contain. No part of this document may be reproduced in any manner without prior permission.